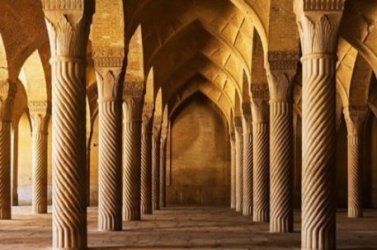 Another amazing attraction in Vakil Complex and Shiraz is Vakil Mosque. The harmonious architecture of the mosque and the sense of spirituality it implies are the two basic characteristics which turn this religious site into a cultural and touristic sight.

As part of Karim Khan’s plan to create a new center of town, Vakil mosque was built in the year 1773. The entrance of the mosque, reconstructed during the Qajar period (19th century), is adorned with tiled stalactites, calligraphy, stone friezes and beautiful tile-work which bear mostly pink floral patterns.

As you pass the wooden entrance gate, you will enter a vestibule which takes you to the courtyard of the mosque through a corridor with a 90-degree rotation in relation to the axis of the portal. This cozy rectangular courtyard includes a large rectangular pond in the center, providing the necessary water for the people who come to pray in the mosque. The Eastern and Western sides are covered with two corridors, decorated with arcades.

On the southern and northern sides of the mosque, there are two porches. The northern porch, also called the Pearl Arch, is flanked by two minarets and includes a high vault, decorated with colorful tiling and a beautiful inscription in tholth script representing some versus of the Holy Quran.

The southern porch of the Vakil Mosque leads to the main prayer hall of the mosque which is also the high-light of the mosque. The southern prayer hall of Vakil Mosque is decorated with 48 spiral pillars, in form of tree of life. This special atmosphere creates a spiritual environment where visitors can detach themselves from the ordeals of everyday life and immerse themselves in a universe beyond our material world. As a tip, we should say that you can also take very unique photos for your social media in this prayer hall and among its columns which create unique perspectives.

Another highlight of this prayer hall is its artistically designed mihrab or altar. The plinth on the left-side of the altar is carved out of a single block of a marble. Also, be sure not to ignore the tall, marvelous pulpit of the mosque, built out of green marble.