Yazd, the Pearl of the central desert, is one of Iran’s most charming cities. From its former name Ysatis, it has been a source of inspiration for many artists. Let’s get seduced by its particular architecture and warm people. A discovery to make walking through the heights of its legendary Towers of Silence as well as in the depth of its underground Qanats. Have a fresh cup of water drawn from its cisterns, let our thoughts flow under the coolness of the wind towers that dot the city. Take your backpack to pick up the wonders gleaned from its shopping streets and caravan stops. A visit to the Temple of Fire to pay homage to the souls of Zoroastrian ancestors. A thought for the sacred fire … Let us take a moment to listen to the Muezzin in its oldest mosque …
A taste of the middle east … Come to visit Iran!

Dolat Abad Garden is one of the nine UNESCO World Heritage-listed Persian gardens, built in 1750 by the Governor of Yazd. Its 34m high wind tower is the tallest in the country, perhaps in the world, and dates back the 19 century.
The garden has many fruit trees including pomegranate trees and ivy.
The most remarkable is the construction of the qanat of more than 30 km exclusively to bring water to the garden. There is a large fountained pool outside and there are several inside the pavilion, all connected.

Besides adobe ocher and white plaster, the tinted glass windows on the doors make a wonderful contrast in the bedrooms.
Visiting the garden makes us forget that we are in a city where water means life in the most realistic sense of the word.

Yazd Zoroastrian fire temple is a holy monument in which the 1500-year old fire is maintained.
The fire is one the 4 holly elements for the Zoroastrian and also the most important one because not only it’s not been contaminated but also it produce the heat and light which are essential for the life. This Bahram fire is one of the few ones which has alived since old times.
During the years the maguses have been protecting the magical fire.
On the building facade, you can see a beautiful Farvahar emblem with 3 mottos, good thought, good word, good deed.
It is a modest edifice to reserve light of the millennium history of Persia.

Zoroastrian Dakhmeh or the tower of silence was built in 1672 in Yazd. According to the old stories and their beliefs that the earth is a holly element and it must not get dirty , they put the dead bodies in the tower and crows and vultures ate them also the sun expedited their decomposition; but nowadays because of the hygienic reasons, they bury the corpse just beside of the mountains in grave which is isolated with cement . Enjoy your visit of one of the enigmatic monuments in Iran. 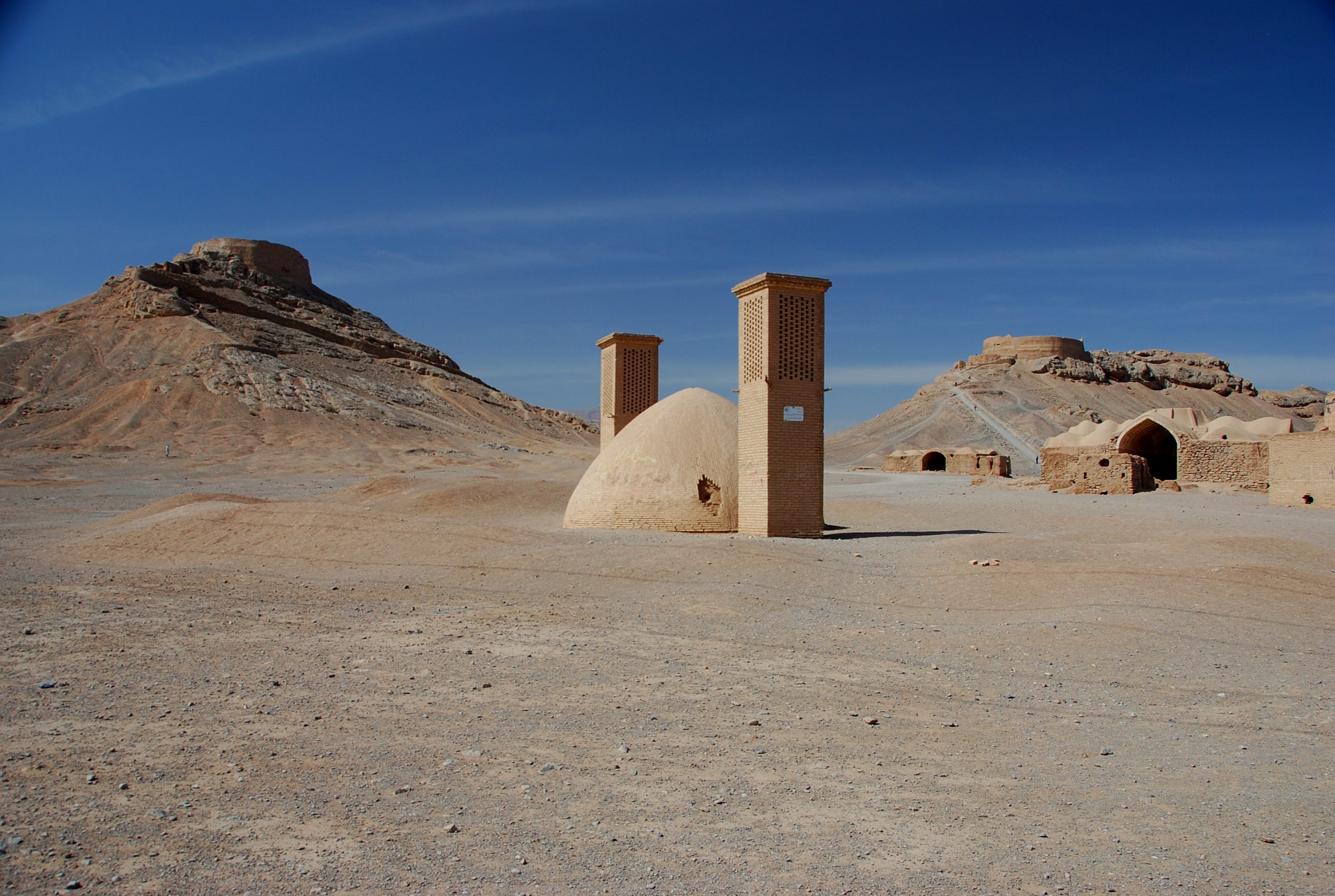 The Jame Mosque or the Congregational Mosque is one of the oldest monuments of the Islamic era in Yazd. An imposing entrance (the tallest of all mosques in Iran) topped by two minarets that dominate the old city.
Much of the history of The Mosque dates back to Mongolian times in the 14th century. The monument has been restored several times. The last works were carried out between 1954 and 1986. The reputation of the mosque is due to its Persian blue tiles, its mosaics with various floral and geometric patterns, or its fine ornamentation in brick and terracotta.
The water is channeled through a qanat, accessed by a staircase to perform ablution before prayer.

Fahadan is the old Yazd district that constitutes the nucleus of the old city.
It is a district with many houses. A walk offers the visit of several historical monuments such as the Ziaeieh seminary (also known as the prison of Alexander), the mausoleum of the 12 Imams, the Fahadan mosque, the Lari house.
The area has experienced significant tourist interest, with many houses transformed into guesthouses or small, cool cafes and restaurants. The sunset is the perfect time to get there and take great photos.

Amir Chakhmaq, this is how the main square of the city of Yazd is called. It bears the name of its builder, the governor of Yazd in the 15th century, under the rein Timurid.
Built as a complex, including among others a bazaar, a mosque and a cistern. Its arcaded facade with its minarets were added in the 19th century.
The changes made have given the place the appearance of Hosseinieh(
place of commemoration of the martyrdom of Imam Hossein, a high religious figure of Shiite Islam) normally constructed in Yazd.
On the square, in front of the facade with multiple arches, sits a sort of ceremonial wooden structure, this object named Nakhl (palm tree), is decorated in black during the Moharam ceremonies, and is carried on the shoulder by the men themselves dressed in black. This procession marks the culmination of the commemoration ceremonies.

Zurkhane is an Iranian traditional sport which philosophy consists in mental and physical improvement.
The athletes not only build their body muscles, but also improve their morality and behaviour by performing ancestral movements.
The gentlemen gather in a small arena that is built slightly below street level to provide constant temperature. In the middle of the arena there is a round or octogonal sunken area named “Gowd”. The exercise starts with a warm up following the rythm of the Morshed, the master of ceremony who plays tombak and manage the training, singing traditional songs. Then they start to play with some special instruments like wooden maces, shields, bows, which have been inspired from the antique weapons.
Some movements remind us the whirling Sufi dance.
The tradition dictates that the older athletes and If one is descendant of the Prophet of Islam (Seyed), have to be more respected, whatever their skills, experience or body condition.  the ovation would turn to a salavat, the formula of praise and salutation to prophet Mohammad and his family.
It is said that the origin of this art goes back to the time that Iran was under Mongol domination, the persian warriors secretly trained to organize the insurrection against the invaders.
The entrance of the ceremonies are absolutely free for the spectators, but they can give money, collected in a vase for charities.

During the Arab invasion in the mid-7th century, a Sassanid princess, Pars-banou, took to the road to flee the intruders. During her journey, she got lost in the desert, in the company of her court. Legend has it that she disappeared into a rock, before she was captured, by her pursuers.
Since then, this place has become a sacred place and every year Zoroastrian pilgrims go there to worship.
Visiting the site allows you to admire the lunar landscape of the Yazd Desert, and above all, you can enjoy a beautiful light in the afternoon.

Kharanaq, an ancient citadel, was a caravan relay on the road to Tabass, 80 km northeast of yazd. The visit could be part of a yazd – meybod -chakchak – Kharanaq excursion. A newly restored caravanserai is located right next door (For safety reasons and also to respect the privacy of residents)
Landscape differs from the desert because it is located high up and enjoys a moderate temperature.
Qanats which feed the surrounding fields are still in use.
The houses fit together and all reveal a similar architectural plan. The stables downstairs, a staircase gives access to the houses, the kitchen upstairs and windows overlook the winding streets. We see plenty of wood on the adobe roofs.
The mosque in the center of the village has a trembling minaret dating back to the 19th century.

Meybod was a prosperous city during the Mozafarid era. In the 14th century, this family seized the power over a vast territory, stretching from Isfahan to Kerman, and founded its dynasty.
Meybod is renowned for its pottery workshops and currently constitutes an industrial center for the production of tiles for the whole country. It is 40 km from Yazd on the road to Isfahan.
A visit worth the detour to discover the remains of a complex dating from the 17th century. There is a caravanserai preceded by a small bazaar, a cistern, a post house and a ice dump.
Zilou is the special hand-woven floor-covering of Meybod. It is a kind of carpet rather woven than knotted, whose designs are made by entangling warp threads passed through the weft. Being less laborious work, the Zilous were intended to cover prayer’s rooms in mosques all over the country.
The ruins of an ancient Naring-Qaleh citadel and a pigeon tower are among other wonders to visit if time allows. 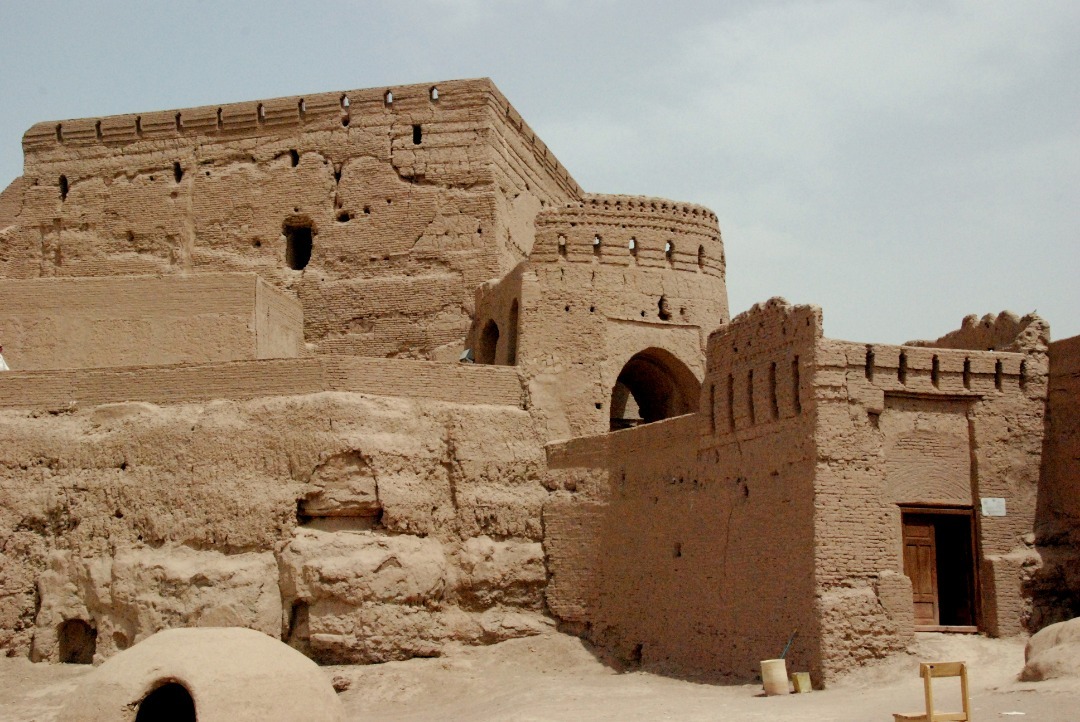