hier is more about city of Tabriz

Tabriz is the former capital and the main city of the Azerbaijan region of Iran and its inhabitants are speakers of the Turkish dialect. It is the 2nd city after Tehran where the decisive battles took place during the major socio-political events of the country during the 19th and at the beginning of the 20th century. Like the drafting and establishment of the constitution and other liberating events during the Qajar monarchy.
Throughout its history, Tabriz has suffered so much damage from natural disasters as it has from invading enemies.
For centuries the city was the only access to the Western world. it was the great gate through which overland trade took place. Tabriz played this role until the Suez Canal came into effect and the sea lanes were used. Thanks to its geographical location and the kinship ties with the people of neighboring countries, especially Azerbaijan and Turkey, the inhabitants have been able to develop smooth and solid trade relations. A lot of goods pass through Tabriz, but also, new ideologies and currents of intellectual thought, such as communism and democratic socialism have been able to penetrate the country.
The customs benefit exclusively granted to the Russians was a matter of greed for the British. The state to satisfy the English had given them the same advantage on the southern border.
The famous Blue Mosque collapsed in an earthquake, brought back to life thanks to a well-carried out restoration, opens the visit of the city. The Azarbaijan Museum is next door, then we set off to visit Iran’s most beautiful bazaar where merchants are grouped into corporations.
There are many possibilities for excursions to nearby sites. As first of all the village of Kandovan, an hour’s drive away, and the visit of its cave houses still inhabited. For those interested in the history of Christianity and the Gregorian faith, several famous Armenian churches are in the area.
A long day of excursion to discover the Church of Saint Stéphanoise and the Church of Saint Tadee (Kara – kelissa), it will be an unforgettable pilgrimage.

Tabriz Historic Bazaar Complex consists of a series of interconnected, covered, brick structures, buildings, and enclosed spaces for different functions. Tabriz and its Bazaar were already prosperous and famous in the 13th century, when the town, in the province of Eastern Azerbaijan, became the capital city of the Safavid kingdom. It is one of the most complete examples of the traditional commercial and cultural system of Iran

The Blue Mosque (Masjed-e Kabūd) is a historic mosque in Tabriz, Iran. The mosque and some other public buildings were constructed in 1465 upon the order of Jahan Shah, the ruler of Kara Koyunlu.

The mosque was severely damaged in an earthquake in 1780, leaving only the iwan (entrance hall). Reconstruction began in 1973 by Reza Memaran Benam under the supervision of Iranian Ministry of Culture.

Azerbaijan Museum is the major archaeological and historical museum in Tabriz, in the northwest part of Iran (East Azerbaijan Province). It was established on April 1958. The museum consists of three major halls, a side yard, office rooms and a library. It mostly contains objects discovered from excavations in Iranian Azerbaijan, also some artworks and sculptures of artists. Its library contains more than 2500 books, both handwritten and printed, about history, archaeology, art and Iranian culture. Apart from National Museum of Iran in Tehran, Azerbaijan Museum has the largest collection belonging to different periods of Iran’s history.

The Jāmeh Mosque  a large, congregational mosque (Jāmeh) in Tabrīz city,  It is located in the Bazaar suburb of Tabriz next to the Grand Bazaar of Tabriz.

El Gölü also called Shah Goli  is a large historic park (or garden) in the south east region of Tabriz. One of its main features is its large artificial lake, measuring 210 meters on sides.

Tradition dates the construction of the park to the late 18th century However, it may have been built earlier as well; some sources suggest as far back as the 14th century.In the Qajar period the park was restored and high terraces were added.

The northern side of the lake was built up, which, according to Penelope Hobhouse, makes the lake “appear to float over the valley”.A causeway leads out to a pavilion, today the site of a restaurant. The pavilion was once crowned with a dome.From the west hillside, a spring feeds the lake, a cascade descending in five terraces. The sight is flanked by poplar trees and willows.

Kandovan  is an ancient village in Sahand Rural District in the Central District of Osku County, East Azerbaijan Province. It is situated in the foothills of Mount Sahand, near the city of Osku. At the 2006 census, the village population was 601, in 168 families.

The village exemplifies manmade cliff dwellings which are still inhabited. The troglodyte homes, excavated inside volcanic rocks similar to dwellings in the Turkish region of Cappadocia, are locally called Karaan. Karaans were cut into non-welded ignimbrites, also called “ash-flow tuffs,” of Mount Sahand. The cone form of the houses is the result of the erosion of ignimbrite layers consisting of porous, round and angular pumice together with other volcanic particles that were positioned in a grey, acidic matrix. During the eruption of Sahand, pyroclastic flows formed the rocks of Kandovan. Around the village the thickness of this formation exceeds 100 metres  and with time, due to water erosion, the cone-shaped cliffs were formed. 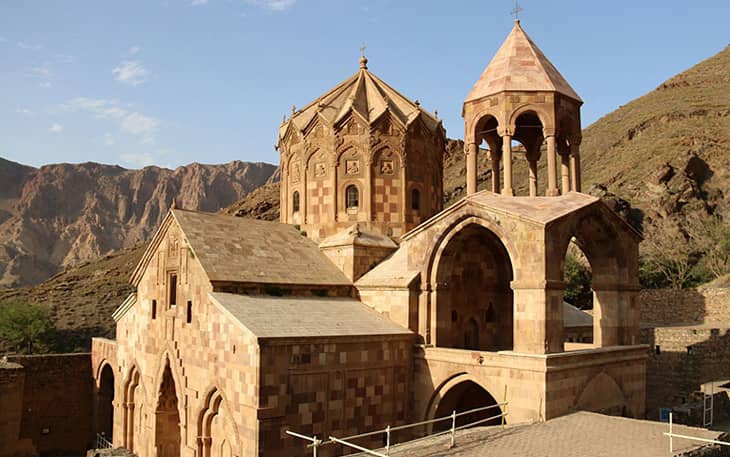 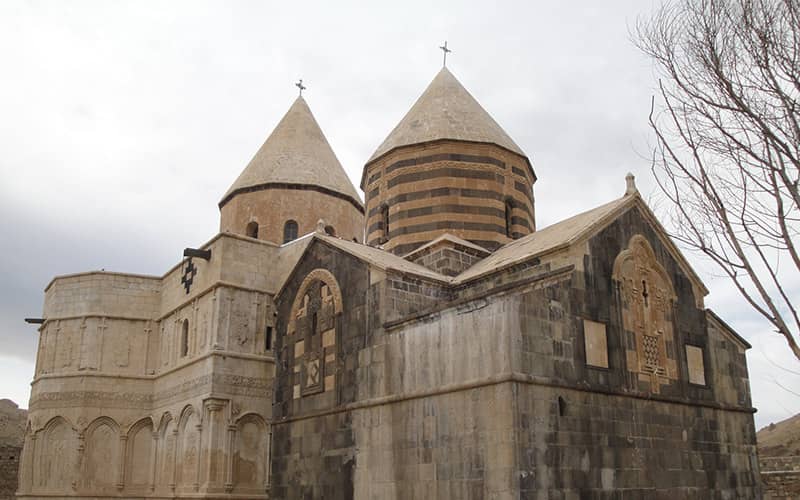