Urmia or Orumiyeh is the capital of Urmia County. It is situated at an altitude of 1,330 metres above sea level, and is located along the Shahar River on the Urmia Plain. Lake Urmia, one of the world’s largest salt lakes, lies to the east of the city, and the mountainous Turkish border area lies to the west.

Urmia is the 10th most populated city in Iran. At the 2012 census, its population was 667,499, The city’s inhabitants are predominantly Azerbaijanis who speak the Azerbaijani language. There are also minorities of Kurds, Persians, Assyrians, and Armenians. The city is the trading center for a fertile agricultural region where fruits (especially apples and grapes) and tobacco are grown. Even though the majority of the residents of Urmia are Muslims, the Christian history of Urmia is well preserved and is especially evident in the city’s many churches and cathedrals.

Urmia Museum with 30,000 historical objects, is considered one of the richest and largest Iranian museums. This museum consists of two main parts, archeology, and anthropology. Valuable artifacts discovered from ancient hills, belonging to the time from the Neolithic period to the end of the Qajar era are exhibited. The tradition and culture of people from the late Safavid era up to now are exhibited in the anthropology hall. In the prehistoric and historic section, Urmia Museum holds various stone, pottery, and metal works from the Neolithic to the early Islamic era. Stone made tools and instruments belonging to the 6th and 7th millennium BC, fine beautiful pottery from the 5th millennium BC, decorative metal works and bronze lion sculpture along with cuneiform scripts, silver coins, glass containers of the Sassanid period, and jewelry are some but not all the objects that are collected in Urmia Museum. In the decorative arts section, interesting objects such as verses from the Holy Quran written in Naskh and Nastaliq script which are two types of Iranian calligraphic handwriting, and miniatures from the 19th and 20th centuries are provided. There are coins from the pre-Islamic era, as well as coins from the Islamic period. This museum was established in 1967 and receives many tourists every year. 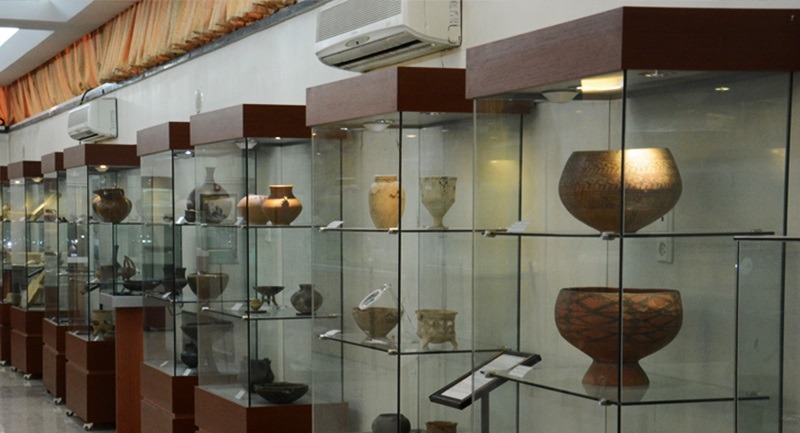 Teppe Hasanlu  is an archeological site of an ancient city, located in northwest Iran), a short distance south of Lake Urmia. The nature of its destruction at the end of the 9th century BCE essentially froze one layer of the city in time, providing researchers with extremely well preserved buildings, artifacts, and skeletal remains from the victims and enemy combatants of the attack.

The site consists of a 25-m-high central “citadel” mound, with massive fortifications and paved streets, surrounded by a low outer town, 8 m above the surrounding plain. The entire site, once much larger but reduced in size by local agricultural and building activities, now measures about 600 m across, with the citadel having a diameter of about 200 m.

The site was inhabited fairly continuously from the 6th millennium BCE to the 3rd century CE. It is famous for the Golden bowl of Hasanlu. Since June 2018, the Cultural Heritage, Handicrafts and Tourism Organization has pushed for the entire archeological site to be declared a UNESCO World Heritage Site. 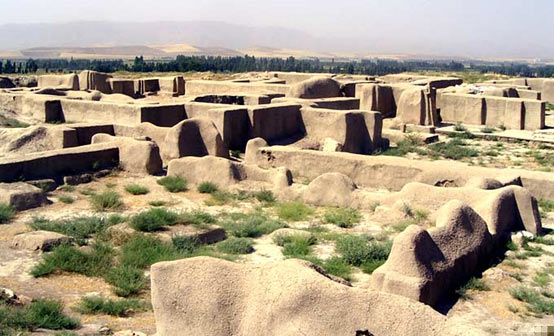 Rock tomb in Fakhrigah is 15 km North-East of Mahabad in West Azerbaijan province, Western Iran. The tomb is carved into the face of a rocky outcrop. It is located along the Mahabad−Miandoab road to the South of the village Inderghash, in Iranian Kurdistan.

In 1936 Aurel Stein, the British archaeologist and Explorer wrote about the tomb and defenses

Grave of the structures includes a porch, behind which is a room containing the grave. The tomb is the only one of all the rock tombs identified in Iran with a facade, and the interior which has columns and lacks any walls. The facade of the tomb was built on a perfectly smooth stone wall with an average height of 4.70 meters and the same width as the façade. The columned porch is surrounded by an engraved frame, the band of which is 22 cm, and which ends on two sides with two stepped platforms of the front porch. 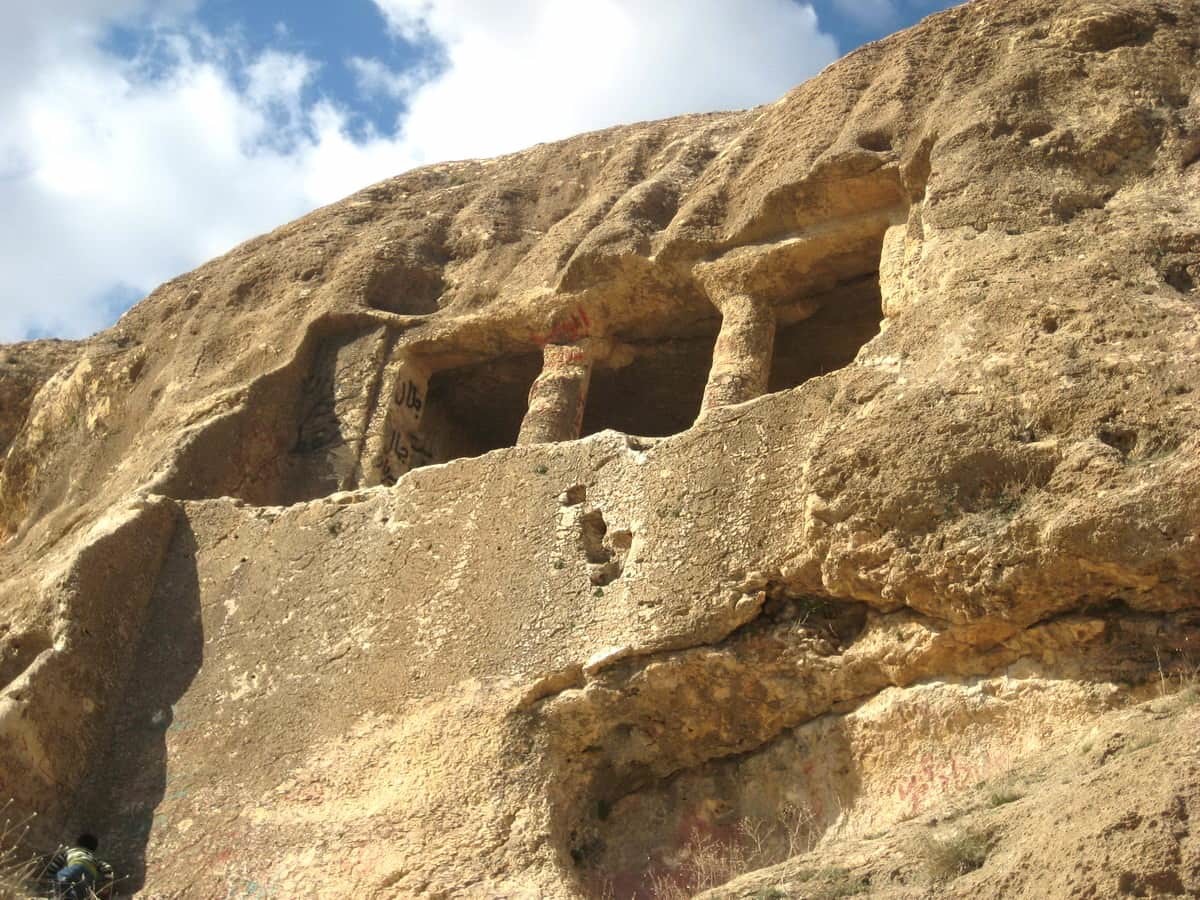 Takht-e Soleymān is an archaeological site in West Azerbaijan, Iran from Sasanian Empire. It lies midway between Urmia and Hamadan.

The fortified site, which is located on a hill created by the outflow of a calcium-rich spring pond, was recognized as a World Heritage Site in July 2003. The citadel includes the remains of Adur Gushnasp, a Zoroastrian fire temple built during the Sassanid period and partially rebuilt (as a mosque) during the Ilkhanid period. This temple housed one of the three “Great Fires” or “Royal Fires” that Sassanid rulers humbled themselves before in order to ascend the throne. The fire at Takht-i Soleiman was called Adur Gushnasp and was dedicated to the arteshtar or warrior class of the Sasanid. A 4th century Armenian manuscript relating to Jesus and Zarathustra, and various historians of the Islamic period, mention this pond. The foundations of the fire temple around the pond is attributed to that legend. Takht-E Soleyman appears on the 4th century Peutinger Map.

This site got its biblical name after the Arab invasion of Iran in the 7th century. Folk legend relates that King Solomon used to imprison monsters inside a nearby 100 m deep crater which is called Zendan-e Soleyman “Prison of Solomon”. Solomon is also said to have created the flowing pond in the fortress.

Archaeological excavations have revealed traces of a 5th-century BC occupation during the Achaemenid period, as well as later Parthian settlements in the citadel. Coins belonging to the reign of Sassanid kings, and that of the Byzantine emperor Theodosius II (AD 408–450), have also been discovered there.