Zanjan is the capital of Zanjan Province in Iran. It lies 298 km north-west of Tehran on the main highway to Tabriz and Turkey and approximately 125 km from the Caspian Sea. At the 2016 census, its population was 521,302 which is the 20th largest city in Iran. The population of Zanjan consists mostly of Iranian Azeris who can also speak the Azerbaijani language.The entire province has 21,733 square kilometers.
Zanjan is known for its handcrafts such as knives, traditional sandals, called charoogh, and malileh, a handcraft made with silver wires. Zanjani artists make many things like various decorative dishes and their special covers as well as silver jewelry. In ancient times, Zanjan was known for its stainless and sharp knives. But this tradition is gradually becoming extinct by introduction of Chinese-made knives into the market which are far cheaper, more abundant and less artistic. Many villagers today are traditional carpet weavers. Zanjan’s population boasts the highest level of happiness among the people of 30 other provinces in Iran.
Hamdollah Mostowfi, the Iranian traveler and historian, in his book claims that Zanjan was built by Ardashir I, the first king of the Sassanid Empire and named as “Shahin”.One important moment in the history of the city was in 1851 when the city became a center for the suppressed Babi religious movement, along with Neyriz and a fortress known as Shaykh Tabarsi. The forces of the central government captured the Babi fort in Zanjan after a long siege on the orders of Grand Vizier (Prime Minister of Iran) Amir Kabir and killed or expelled the Bab’s followers.
According to the Food and Agriculture Organization (FAO) of the United Nations, rainfed agriculture makes up around 42% of Zanjan’s land cover and grasslands account for another 37%. The remainder is bareland, irrigated agriculture, forest, orchard and riverbanks. Only 1.07% of the land is urban development.

The Dome of Soltaniyeh is a complex of ruins centering on the Mausoleum of the Mongol ruler Il-khan Öljeitü, also known as Muhammad Khodabandeh.
The main building, erected between 1302 and 1312 AD, it may be compared to that of Brunelleschi’s cupola for Christian architecture. It is one of the largest brick domes in the world, just at the theoretical engineering limit for a brick dome and the third largest dome in the world after the domes of Florence Cathedral and Hagia Sophia. The Dome of Soltaniyeh paved the way for more daring Iranian-style cupola constructions in the Muslim world, such as the Mausoleum of Khoja Ahmed Yasavi and the Taj Mahal. Much of its exterior decoration has been lost, but the interior retains superb mosaics, faience, and murals. People have described the architecture of the building as “anticipating the Taj Mahal.”
The estimated 200 ton dome stands 49 meters tall from its base, and is currently undergoing extensive renovation.
Arghun, the Ilkhanid ruler of Iran at the time, established the Sultaniyya as his summer capital. His son, Muhammad Oljeitu Khudabanda, furthered the city’s development and transformed it into the capital of the empire. After Oljeitu’s death, the city began a steady decline, and from a once flourishing city it now only has two buildings which show signs of its former wealth and importance, an octagonal tomb and an adjacent khanaqah. A khanaqah is a building designed specifically for Sufi gatherings as a spiritual retreat. The strong quality of the preserved tomb attests to the richness of its patronage.
The Tomb of Oljeitu was utilized for multiple functions, such as Quran reading, praying, teaching, housing, and medical purposes. The main building is approximately 38 m across and is crowned by a dome with an average diameter of 24m. The tomb is highly visible, due to its unique incorporation of eight minarets enclosing the dome above the gallery. More specifically, Oljeitu’s complex consists of four iwans connected by arcades with muqarnas surrounding the perimeter of a courtyard; this was considered the classic Iranian style. The tomb itself stands behind the southern iwan. Furthermore, the iwans were all plastered and painted, and the courtyard was paved with white marble.
As for the interior of the tomb, it is decorated in tile and plaster. The underside of the iwans are stuccoed with bands of ornamentation, that were later painted. A significant inscription–spotted with ogival forms sculpted over cloth–circles the entire dome. The galleries have low, wooden or marble railings. The windows are fitted with bronze screens, along with bronze knobs and balls set with gold and silver.Some elements from these window grilles were inscribed with their patron’s name or with detailed scenes, such a depictions of a horseman or of falconry. 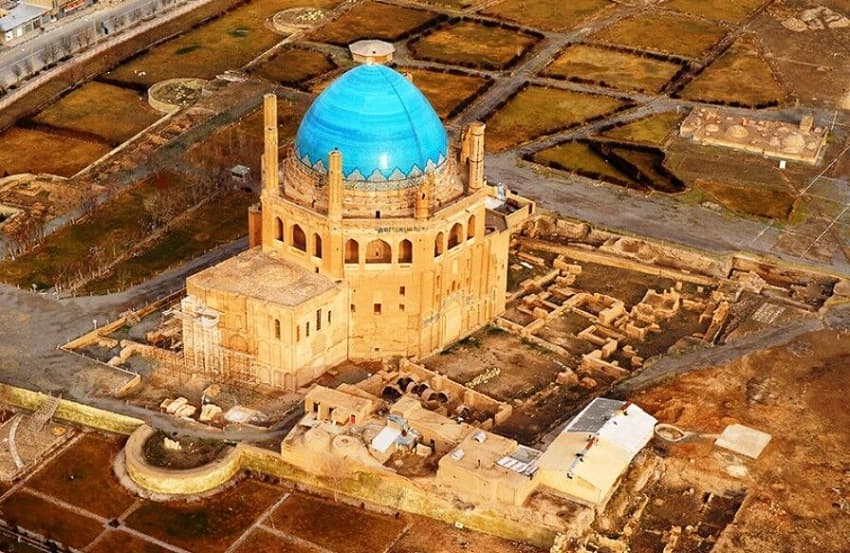 Historical Edifice of Rakhtshooy Khaneh which translates to wash-house lies at the historical texture of the Zanjan city and it was built nearly 20th century. This place was used for washing clothes by women around the city. It was constructed by two brothers named Mashad Akbar and Mashadi Esmail, Akbar was an architect and Esmail was a stone mason. This historic building is currently being used as Zanjan Anthropological Museum. 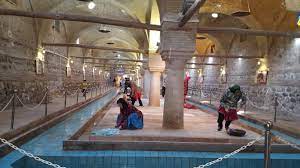