Golestan Palace is the most famous Royal Palace in Iran.
Golestân retains a high symbolic value from the Qajar Dynasty. Although the site had attracted the Safavid king, Shah Tahmasb, due to its suitable landscape and weather, there were few constructions and developments until Aqa Mohammad Khân Qajar chose Tehran as its capital and started to refurbish and annex buildings like the one that hosts Takht-e-Marmar or Marble Throne, placed in the middle of the great Iwan with walls decorated with mirrors and frescoes. Fath Ali Shah, his successor, had other buildings erected that were destroyed or altered during the time of Nâssereddin Shah.
It is to Nâssereddin Shâh (1848-1896) that we owe most of the current palace, a remarkable example of European architecture combined with Persian art. The hall of mirrors was completely rebuilt. He also built the talâr-e âyneh, as well as a very beautiful palace of white marbles.
The Shams-Ol-Emâreh building, a gift from Moayer-Ol-Mamâlek, son-in-law of Nâssereddin Shâh, completes the courtyard of the grand palace since 1867.
Located to the right of the marble throne, The Khalvat-e Karim Khâni (Karim khan cozy corner) houses the beautiful marble recumbent statue of the tomb of Nâssereddin Shâh, which was originally in a chapel adjacent to the sanctuary of Hazrat-e Abdol-Azim shrine in Rey, where he was assassinated.
The two rooms of the Negâr Khâneh, on the ground floor of the main palace, exhibit the private collection of Qajar rulers and the gifts of foreign monarchs, furniture, and paintings, many of which were offered to Nâssereddin Shâh, the first Shah of Persia to travel in Europe.

Reza Khan coronated in 1926, and His son Mohammad Rezâ Pahlavi was also crowned in 1967 on the Peacock Throne at Golestan.

Iran-e-Bastan, Archaeological Museum,
The most important archaeological museum in Iran, built in the 1930s under the supervision of André Godar, the French architect, to welcome and house the findings from archaeological missions throughout Iran. The entrance was inspired by the magnificent arch of ctisphon palace.
The building has two floors. The first floor reserved for the Paleolithic & prehistoric periods and the ground floor, intended for
the historical periods. Totally the museum covers almost 400000 years time span.
pottery is most abundant item in the museum which also serves as an index in the archeological chronology.

Among the most remarkable showcases we can indicate the one which shows a collection of stamp seals (stamp, signifying the signatures in Antiquity)
and cylindrical seals (mainly used in commerce) and tokens, functioned as delivery note in ancient time

A display case features artifacts from Shahr-e-Soukhteh (the burnt city) that is a site in the southeastern region of Iran in the 3rd millennium B.C. One of the most exciting object is a goblet showing the oldest animated painting in the human history.

A very rich collection of bronze objects from louristan, shows objects of high artistic refinement such as horse bit, pins and funerary artifacts.
A large bas-relief brought from Persepolis showing Xerexes and other courtiers.
A headless statue of Darius from Susa and mosaics from Bishapour (Sassanid period) are other significant objects in the museum.
The location of the museum is in the vicinity of some other museums including Islamic period museum and glassware museum. 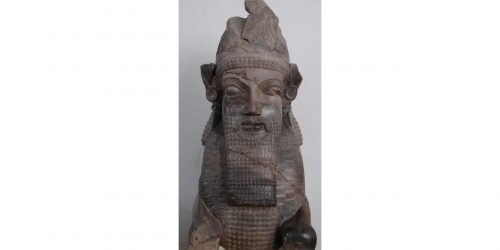 The Royal treasury of Iran
The Royal treasury, probably an unparalleled collection in the world is currently housed in the basement of the Iran Melli Bank. The accumulation of this treasure dates back to the Safavid era in the 17th century. After the conquest of India by Nader Shah, he brought back a great deal of precious stones including the two largest pink diamond in the world, sea of light and mount of light. The latter later possessed by british army and is now on the crown of the queen.
In the Qajar era, once again, Fath Ali shah took possession of it and the personal interest of the Qajar kings added quite a few new gems to it, which were partly bought and some counted among the diplomatic gifts.
In 1937 a law required that the treasury be transferred to the Melli (national) bank as the financial endowment of national currency.
The treasury has been prepared and opened to the public with very restricted visiting times.
Among the unique jewels, we can name
The crown of the Pahlavi Dynasty of 2080 grams, used by Reza and Mohammadreza Shah in their coronation ceremony. The famous diamond Daraye-Noor (sea of light) of 182 carats in pink color.
The Kiani crown, belonged to Fath Ali shah and other Qajar kings, set with a 120 carat garnet.
The jeweled globe, made in 1869 by the order of Nasserdin-shah was made basically with 3656 grams of gold with 51366 precious stones mounted on it.
The peacock throne (in Persian named Tawouss, beloved of Fath Ali Shah) dating from the beginning of the 19th century.
Note the visiting hours are from 2:00 p.m. to 4:30 p.m. Open Saturday through Tuesday under strict control. 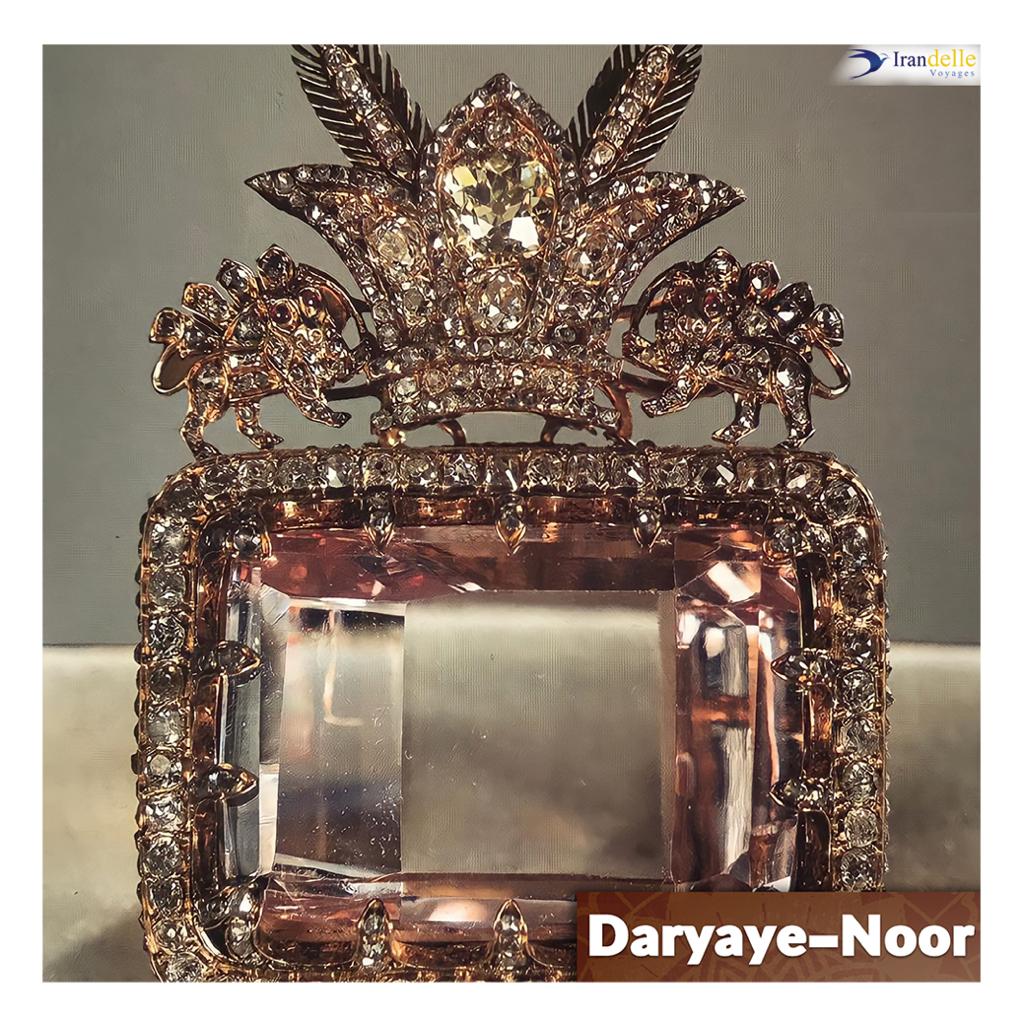 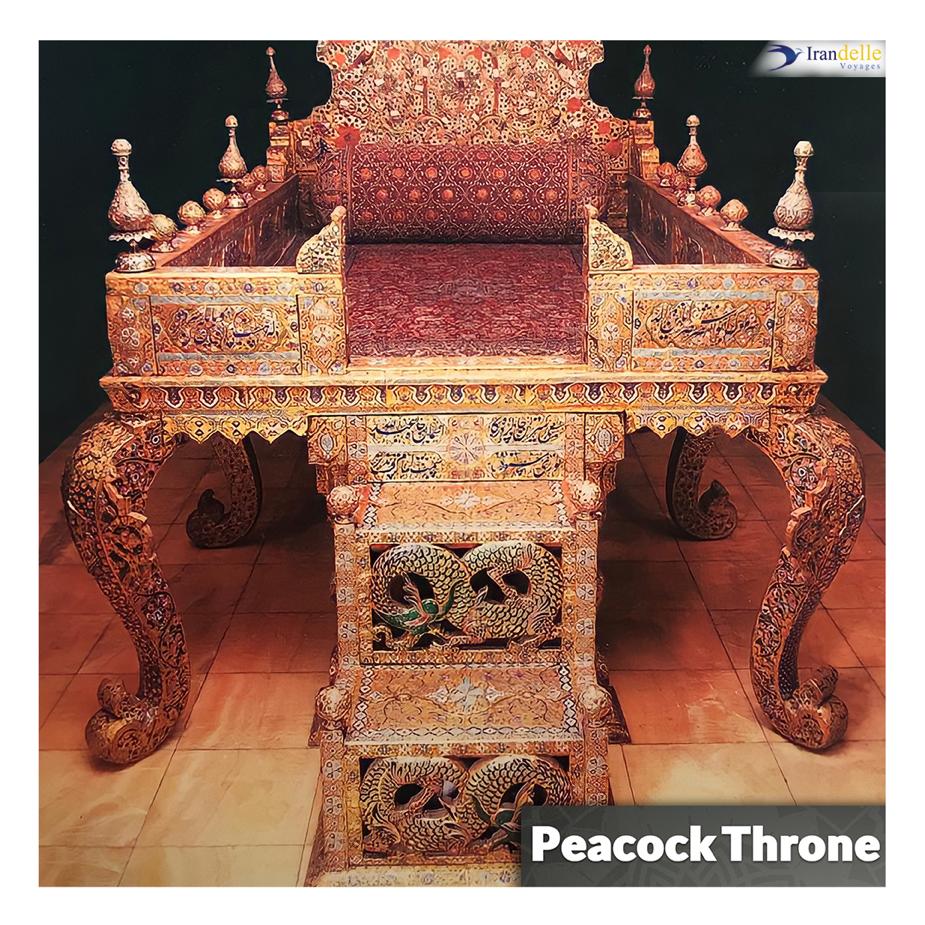 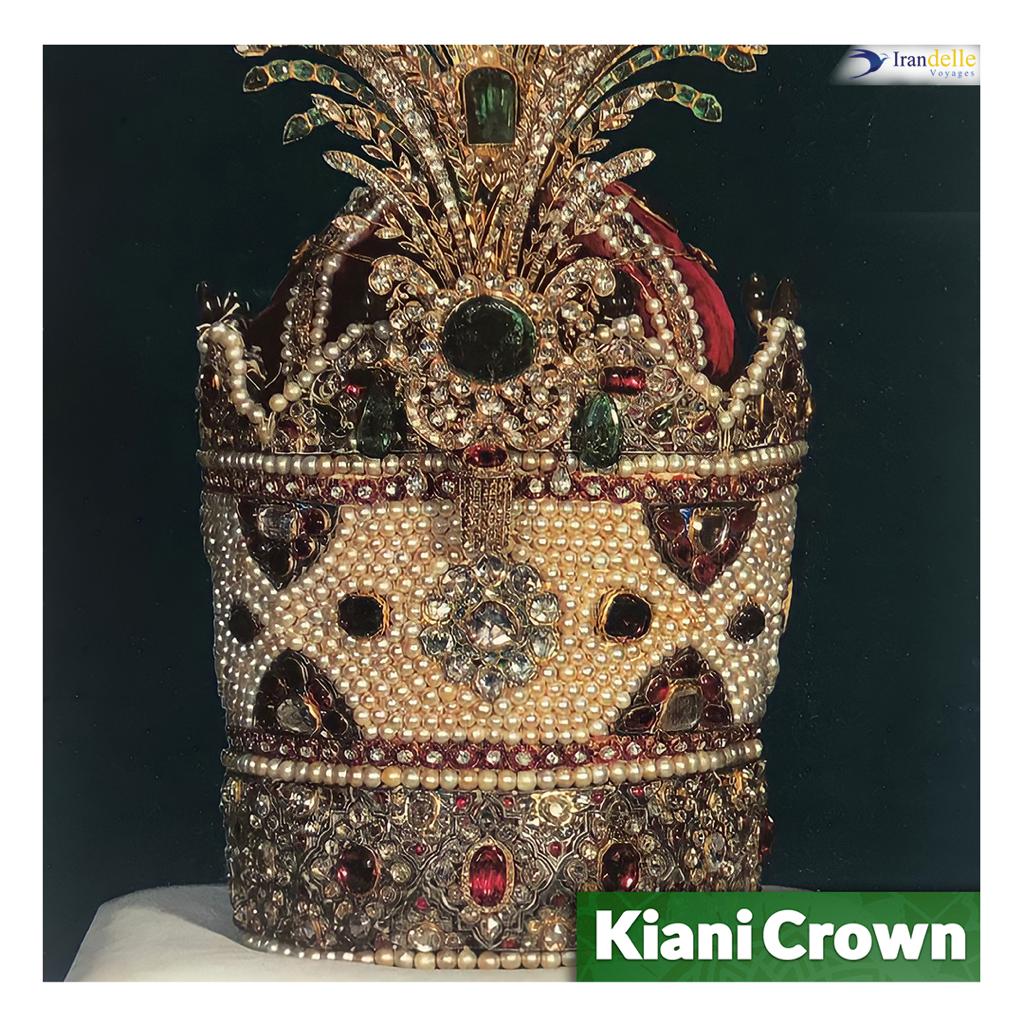 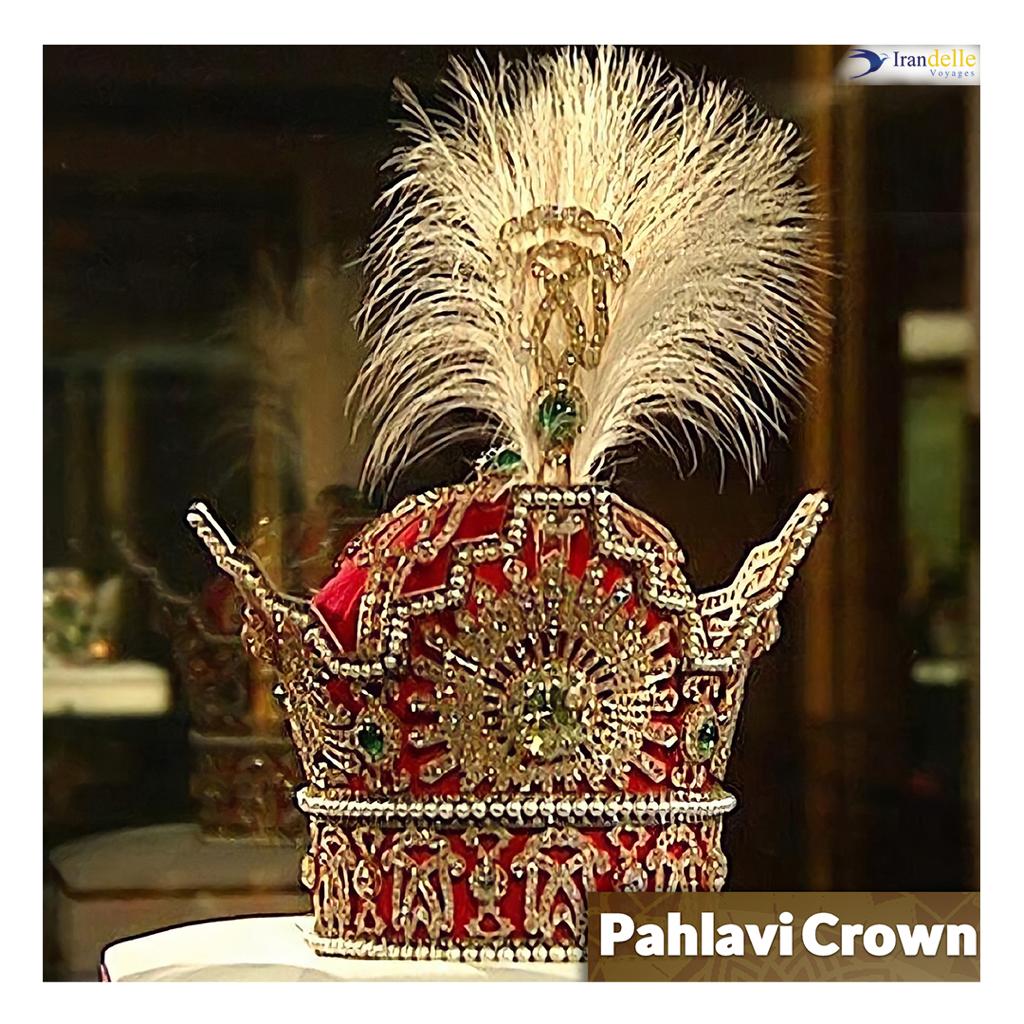 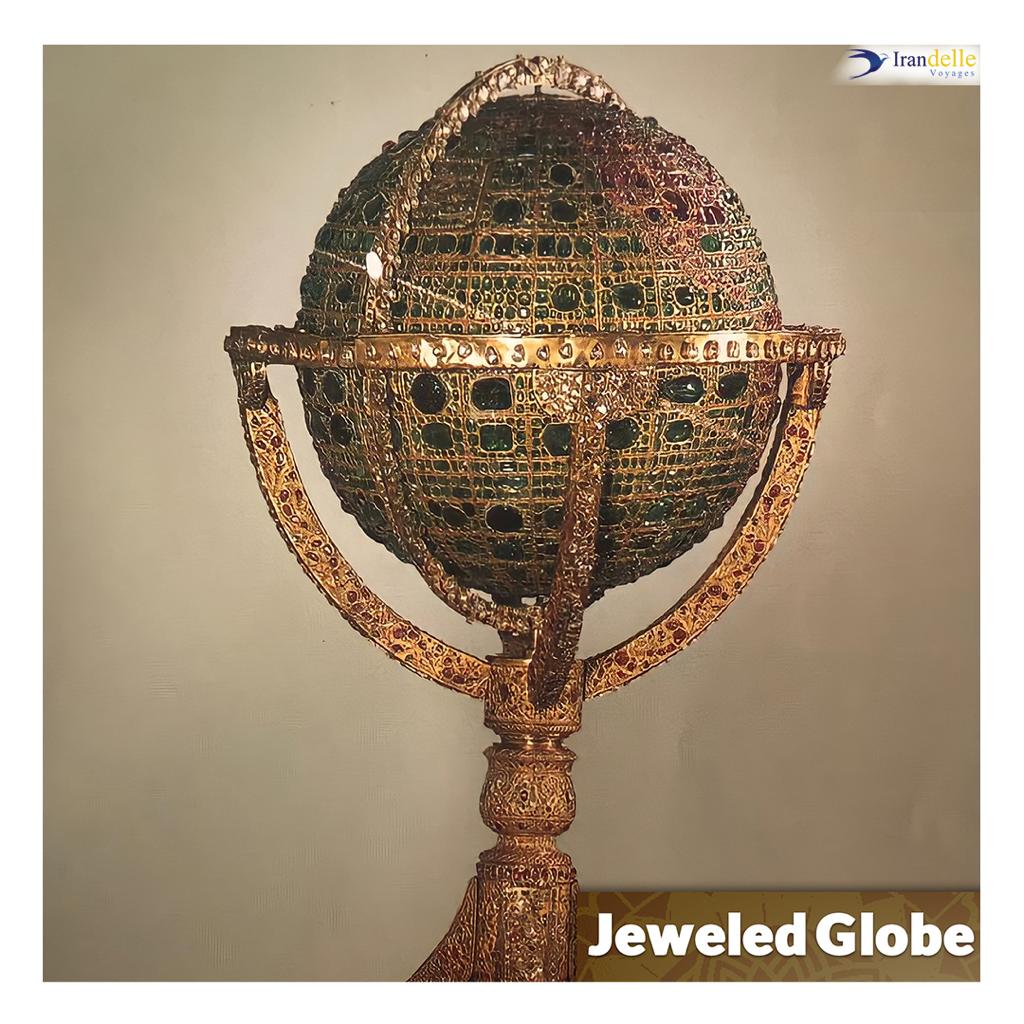