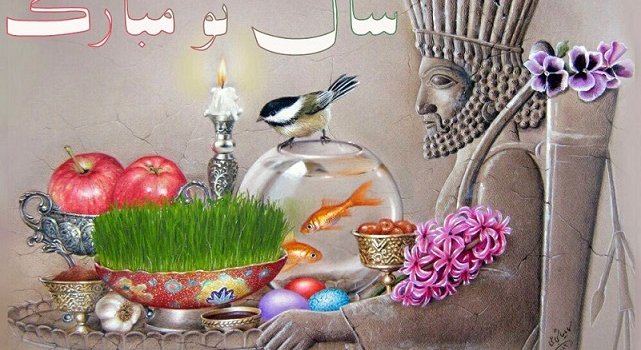 As the cold winter goes and the vivifying spring comes to animate nature once more, Iranians also celebrate the coming of New Year. The celebration of the Iranian New Year or Nowruz, like in any other country, includes a set of traditions. On March 20, as we get close to the moment when the year changes, Iranians set a table, called Haft-Sin, and all the members of families gather around it to celebrate the coming of the New Year. The Haft-Sin, which has its roots in the traditions of Persia, literally means “seven Sin.” However, you should know that Sin here doesn’t mean a guilty action. It refers to “س”, the fifteenth letter of the Persian alphabet. Why? Because the main elements which make the Haft-Sin all begin with the letter “س”, pronounced as sin. These elements include: Seeb (apple), Samanu (wheat germ sweet pudding), Senjed (Oleaster), Serkeh (vinegar), Seer (garlic), Somaq (sumac) and Sabzeh (wheat, barley, mung bean, or lentil sprouts grown in a dish). In addition, Sekke (coins), Sonbol (hyacinth) and Sa’at (clock) are often included too.

Other elements which are part of the Haft-Sin but do not begin with the letter “”س are the Holy Quran, the Divan of Hafez (the collected poems of Hafez), a mirror and a tank full of gold fish.