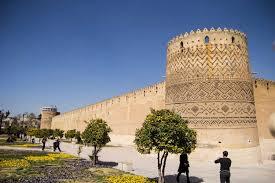 To build his citadel, Karim Khan invited the best national and international architects to come to Shiraz and design the arg. In addition, he ordered the best construction material be brought to Shiraz to be used in building this magnificent citadel.

As you approach the citadel of Karim Khan, its unique brick-work and tall watch-towers attract your attention. Entering the citadel, make sure to spend some minutes probing the painting just above the entrance gate. It represents Rostam, the most famous mythic hero in Iranian culture, killing the white div or demon. The theme of this Qajarid painting (19th century) is borrowed from epic book Shah Nameh (the Book of Kings) by the famous Iranian poet, Ferdowsi.

On the Western, Northern and Southern parts of the citadel, there are three porches, each one decorated with two high-rising columns. Flanking these porches, there are rooms in various sizes which once hosted both the family of Karim Khan and his formal guests.

Inside the rooms, you can feast your eyes on beautiful decorations such as arabesque and floral patterns featuring Persian flower and bird (Gol-o morgh) motifs. These patterns, which were mostly common in Shiraz, were painted in vivid colors and gilt on the upper parts of the walls and ceilings. The ceiling’s ornaments were painted using herbal colors and gold plates. Furthermore, the interior used to be abundantly decorated with tiles, marbles, plaster works and gilded paintings. In addition, large mirrors, brought from Russia, Europe, and Ottoman lands were installed here.

The outer façade of the rooms, especially their plinths, are decorated with large carved stone panels, bearing designs mostly borrowed from Persepolis.