Persepolis is the most majestic city that the Achaemenid kings have built. Started by the order of Darius, 520 BC, the rock had to be raised to find the extent necessary for its construction and to fit out the palaces and halls of various names and functions.
Architects and craftsmen from different regions are engaged in the work to create an artistic symbiosis representing all the people forming part of the empire and subject to the undisputed power of the Achaemenid rulers.
The heart of the site is a courtroom called Apadana. This is the courtroom where the representatives of the nations were received. They were on their way to Persepolis on New Year’s Eve, bringing their gifts to the Emperor. The representation of a procession of guests has been brought to light on the stairs of the Apadana.
Two tombs were built on the rock, behinde of the site, belonging to the kings of this Achaemenid dynasty.
The city succumbs to the sacking and the raging fire of Macedonian soldiers in 333 BC. The radiance of a lavish and unparalleled period was thus extinguished, consumed by this fire. 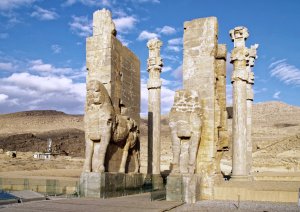