Just located to the right of the Vakil Mosque, there is the Vakil Bath, built by Karim Khan as one of the largest traditional bath-houses in Iran.

The bath, mainly built of brick, gypsum mortar and stone, includes an entrance portal on its northern side, connecting the outer and the anteroom through a low door with a light slope. This technique used in many of traditional Iranian bathrooms is used to avoid the evasion of hot air from the bath.

The anteroom, adorned with arabesque designs, directs to a chamber used as the dressing room of the bath. This room, which is octagonal in shape, is decorated with eight monolithic stone columns. Furthermore, the walls of the bath are adorned with stucco molding in floral and geometric patterns. Also, a big pool is built in the middle of this room, with some empty spaces around which were used as shoe boxes.

A corridor where the latrines are situated connects the dressing room to what is in Persian architecture called Garm-khaneh or literally the heat house. The heat room enjoys a square plan with four rock columns, topped by a canopy of vaults. Hot water canals passed under the floor covered with stones. The dados are built out of green marble plates, imported from Tabriz. In addition, there are two deep niches with a large stone pool in front of them which were dedicated to the nobiles. The outstanding decorations of this part of Vakil Mosque are the plaster designs created in the Qajarid era (19th century) covering the Zand designs.

Also, the wax figures and a voice-over speaking in the sweet Shirazian accent represent and describe the different procedures of bathing in the Zand era. As it becomes clear little by little, the bathrooms were not only a place used for personal hygiene, but also a gathering place in which different ceremonies were held. A famous marriage ceremony, called ‘Henna Bandan’ in which the groom’s relatives put Henna on bride’s hands as a symbol of joy and fortune, is demonstrated in one the rooms of the Vakil Bath, using wax figures and playing the music played in this ceremony. So, by visiting the Vakil Bath, you will not only get familiar with one of the architectural gems of the Zand period in Iran, you will also get familiar with a number of Iranian cultural traditions. Therefore, make sure not to miss visiting the Vakil Mosque during your trip to Shiraz. 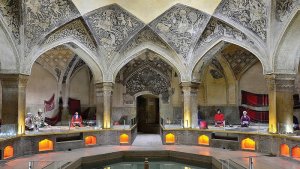