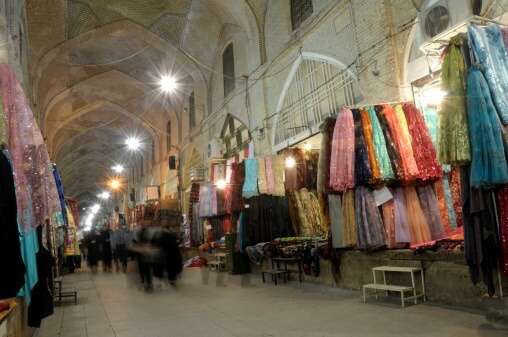 One of the highly attractive parts of Vakil Complex, in which every tourist and visitor can spend hours and hours without being bored, is no doubt the Vakil bazaar of Shiraz.

Inspired by the Safavid Bazaar of Lār, a city near Shiraz, Karim Khan ordered the construction of Vakil Bazaar. The completion of the bazaar took about four years, from 1770 to 1774.

The Vakil Bazaar, stretching from North to South, is composed of two perpendicular archways. The Northern and Southern parts of the bazaar, called rasteh, included eighty-two shops, while the Western and Eastern rastehs lodged twenty and thirty-eight shops respectively.

In addition to shops, Vakil Bazaar hosts several workshops, storerooms and caravansaries. The caravansaries in the eastern, western and northern sides of the bazaar are called Rowghani, Ahmadi, Qawami and Gomrok. There is another caravanserai built on the Western wing of bazaar known as Fil caravansary (elephant caravansary). Fil Caravanserai was built in 1766, mostly housing the offices of merchants active in the bazaar. Unfortunately, some parts of Qawami and Rowgani caravanserais, as well as eight arches of the bazaar, were demolished due to urban expansion undertaken during the Pahlavi I era.

Having been an international trade center, Vakil Bazaar now contains 180 shops, mostly selling spices, rugs, carpets, copper handicrafts and antiques. The highlight of the bazaar is the Qajarid Saray-e Moshir, built by Mirza Abolhassan Khan Moshirolmolk in the 19th century. Being located at the southern end of the bazaar, Saray-e Moshir is comprised of a large pool in the middle surrounded by four flower beds and also shops on its western and eastern sides.  Local souvenirs and handicrafts are being sold in this bazaar and caravanserai.