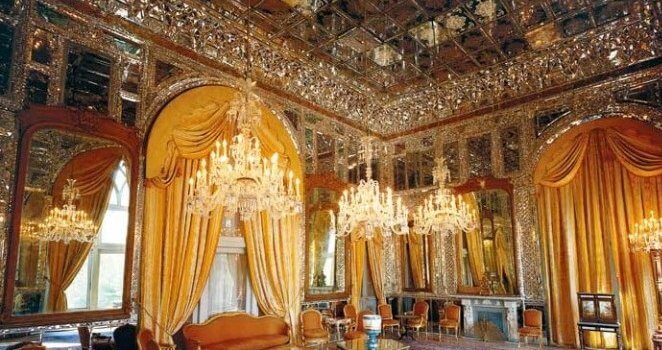 The Mirror Hall and Salam Hall were built concurrently in 1874 to safeguard the Peacock Throne and the Imperial Throne. Abdul Hassan Mernār-bashi, also known as Sani’ al-Molk, had worked on the design of the hall in close cooperation with the then construction minister Mirza Yahyä Khan Moatamed At-Molk. On completion, renowned painter Kamal Al-Molk started working on his famous painting of the Mirror Hall. Incidentally, some jewels from the peacock Throne were stolen, thus putting the painter under suspicion and prolonging his work by five years.

Aaj is a Turkish word for “hunger” and the hall where the king’s guests were served food has, thus, become known as Aaj Hall. A note of caution, nonetheless, seems necessary here. In Persian, the word for ivory has exactly the same pronunciation as the word for hunger in Turkish, namely Aaj, and since there is a pair of elephant tusks in this hall, a gift to Mohammad Reza Pahlavi from the government of India, many Iranian visitors call the Aaj Hall the Ivory Hall.