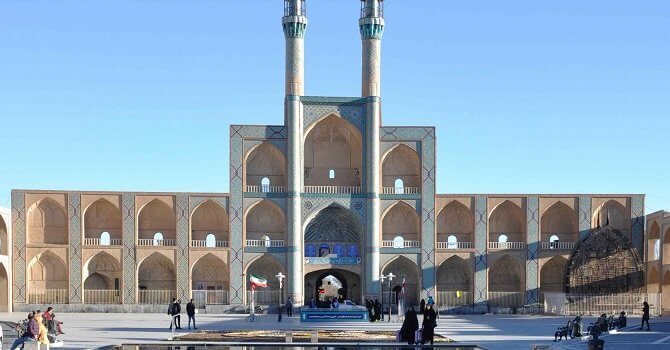 Amir Chakhmakh , this is how the main square of the city of Yazd is called. It bears the name of its builder, the governor of Yazd in the 15th century, under the rein Timurid.
Built as a complex, including among others a bazaar, a mosque and a cistern. Its arcaded facade with its minarets were added in the 19th century.
The changes made have given the place the appearance of Hosseinieh(
place of commemoration of the martyrdom of Imam Hossein, a high religious figure of Shiite Islam) normally constructed in Yazd.
On the square, in front of the facade with multiple arches, sits a sort of ceremonial wooden structure, this object named Nakhl (palm tree), is decorated in black during the Moharam ceremonies, and is carried on the shoulder by the men themselves dressed in black. This procession marks the culmination of the commemoration ceremonies.